Itinerary
Day 1
We start your adventure with a tour of Portland, the City of Roses and Columbia Gorge National Scenic area for a few highlights of spectacular Multnomah Falls and Gorge Waterfalls. This combination offers a well-balanced overview of both downtown and surrounding area’s history, culture and current events. Travel through the various parts of the city and visit all the must-see attractions, then we take you on another adventure throughout the various parts of the city neighborhoods, historical buildings, businesses and sights.

On our acclaimed Portland City Tour. Some of the many attractions may include:

1. Downtown Portland:
Enjoy the sites of Pioneer Square and learn about the great diversity found in Portland’s downtown area, the historical importance it has played in the state’s history and the fast-growing culture that exists in the City of Portland. Learn about the final resting place of many prominent and notable citizens of Oregon, including many governors and United State Senators and other notable burials in the City of Portland.

2. Pittock Mansion:
A French Renaissance Chateau listed on the national registry of historic places. Enjoy the spectacular views from the grounds of the Pittock Mansion.

3. Portland International Rose Gardens:
With our 550 different varieties of Roses and the lush and beautiful Washington Park featuring some of the most amazing cascade mountain views around.

4. Portland Neighborhoods:
Some of the most popular neighborhoods may includes Nob Hill, The Pearl District, North Mississippi, Alberta and North Portland, Vista Hills and Council Crest.

Lunch: Downtown Portland area – on own

Multnomah Falls:
The second highest year-round waterfall in the United States. Nearly two million visitors a year come to see this ancient waterfall, making it Oregon’s number one public destination. Fed by underground springs from Larch Mountain, the flow over the falls varies but is highest during winter and spring.

Bonneville Dam:
In 1986, the Bonneville Lock and Dam project was placed on the National Register of Historic Places; it was later elevated to National Historic Landmark status. Several visitor centers provide information on fish migration and the operation of the powerhouse and navigation lock.

8:00am Depart Portland to Astoria

Lunch: Upon arrival in Cannon Beach a selection of restaurants to select from

Cannon Beach: A story book beach town with many scenic views including beautiful shorelines and Haystack Rock. Take a few minutes to stroll the cozy main street, shops, art galleries and a chance to stroll along the beach again. 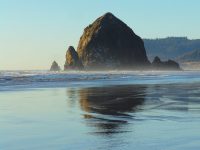 Our next stop the Historic Haystack Rock. A large basalt mono lifts that acts as marine wildlife sanctuary. Great location for some amazing photo shots before continuing south along Hwy 101.

Tillamook Cheese Factory: This is a great place to pick up gifts for family and friends or taste special reserve cheeses, ice cream and yogurt. 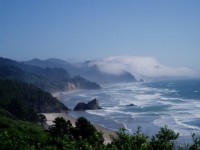 We’ll travel to Lincoln City for a moment to enjoy factory outlet shopping ( No Tax!), then time to relax and a chance to freshen up for the evening dining and entertainment. Spend a little time exploring the beaches or Spirit Mountain Casino located right on the beach with some amazing views.

Our stops today include:

Enroute back to Portland optional to stop and enjoy some amazing Oregon’s premier wineries. Portland is the perfect hub for Oregon Wine Country and the Willamette Valley. With more than 580 Oregon’s wineries calling the Willamette Valley home, it’s easy to find one to suit your taste. Whether you’re in the mood for Pinot Noir or other varietals, experiencing the ambiance of a hip, metropolitan winery or admiring the legacy of a small town vineyard pioneer, you’ll find it in the Willamette Valley.

We will work to make any arrangement that work within your schedule. Contact us for customize trips.

* Qualified English-speaking tour guide; Special arrangements can be made for interpreters if requested.

* Accommodations in double rooms do not always include private restroom. Special arrangements made upon request.

* Meals not included in price

* All transportation during tour included

Contact us for exclusive itineraries for small groups or individual travelers requiring special assistance. We will be happy to assist in scheduling your travel.